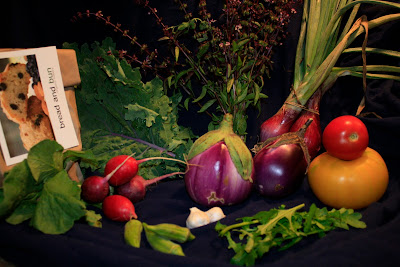 This week my CSA box screamed BAKE ME. Maybe it was the small sample loaf of multi-grain bread from a local bakery, Bread and Bun, that was included this week. Or maybe it was the lack of vegan calzones in the freezer. Or perhaps it was just the dizzying array of fresh goodies in this week's box. In addition to the bread, this week included:
First, I HAD to make kale chips. You knew that was happening. I am sure there are other ways to prepare kale, but with my busy life and my love of dehydrated kale, I couldn't see another use. Red Russian imparted a different flavor profile, a little less sweet than curly kale, but still very good!

Since I had extra trays in the dehydrator, I decided to slice the heirloom tomato thin, lay it in a single layer on the tray, and sprinkle it with Italian seasoning. Now I also had herbed tomato chips! These were super yummy as an evening snack a plane trip.

I also fell back on another favorite. I made Okra Fries with the small bag of okra pods. To answer a question from last week, baking the okra in this method doesn't leave them super slimy. They are soft on the inside but crisp on the outside which I think helps.

It may not be a real "calzone" but I used a number of ingredients to make 8 vegan sandwich pockets which then were individually wrapped and frozen for quick lunches and dinners. Using the dough recipe from these pockets, I diced the eggplant, sprinkled it with salt and let it sit for 20 minutes. Meanwhile, I sauteed the onions and garlic (which I had diced) in organic canola oil. I squeezed the excess liquid from the eggplant and added it to the pan. Then the slicing tomato was added along with the basil. I added nutritional yeast after cooking and filled the dough with the prepared mixture then baked according to the instructions.

The arugula and garlic was used in a cold barley salad. I cooked the barley with some of the garlic then tossed it with an unfiltered olive oil and lemon juice vinaigrette along with peas, cherry tomato quarters, and the arugula. The leftover arugula became a simple green salad that paired nicely with the pocket sandwiches.

The radishes and onion were so pretty, I had to make another salad! This one involved slicing the radishes, an onion, and an English cucumber thinly. I sprinkled them lightly with salt and then pressed the water out of them. I made another dressing with olive oil and red wine vine and some of the dried chili peppers from last week and tossed the vegetables in the dressing.

If I didn't enjoy making my own bread, I would definitely order more from Bread and Bun. This multigrain loaf became my afternoon snack for several days. I would slice a couple of thin slices off the bread and put creamy almond butter and Nutella on it. So tasty!
Posted by C.G. the Foodie at 9:03 AM

I love your site, It is a pleasure to visit.

I have added your site to my site.

Please link my site to your site.