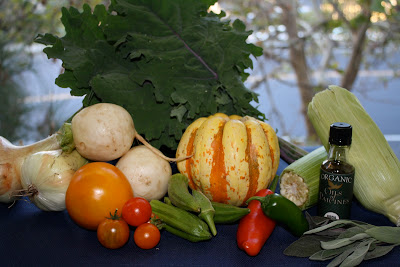 Produce picked fresh the day you pick it up from the farm. Who could imagine something better that delicious goodies you can see being grown and prepare that evening in your home! Community Supported Agriculture (CSA) has been growing in popularity around the country. A CSA is when a local farm offers up limited "shares" of the harvest for sale to community members. I was lucky enough to get an opportunity to purchase a half-share at Full Circle Farms in Sunnyvale, Calif. After picking up my first week of produce, I posed a question to Twitter to see if anyone would be interested in how I am using my CSA box each week. You asked, and I delivered. This was my box for the week of October 11th.

This delivery included:
I knew I would be traveling for part of the week at a debate tournament. Which meant that I both wanted to ensure I used the produce before traveling but also wanted to bring some of these goodies with me on the plane.

Corn: I did a quick partial steam on the corn to set the milk. Once it cooled, I used the OXO Good Grips Corn Peeler I scored from IFBC, to shuck the kernels. I then dehydrated them and bagged them for use later this winter. Snuck a couple bites for a snack and it was sweet and country. Can't wait to throw them into a dish or just munch on them one afternoon!

Kale: This one was easy. Kale chips!

Olive Oil & Sage: I washed and left the sage leaves to dry between paper towels. I then sliced the sage leaves into ribbons and added it to the oil to infused. I should have sage oil soon!

Onions: Sliced thin, I added these to a homemade miso soup.

Mixed Peppers: Sliced and dried to spice up future recipes!

Slicer Tomato: Sliced and ate fresh by itself. Fresh local tomatoes are amazing!

Cherry Tomatoes: These were cut in half and tossed into the dehydrator. After drying, I had snacks for the plane.

Turnips: These were sliced super thin, tossed in a drizzle of organic canola oil and some sea salt and chili powder. Dried to make turnip chips for traveling.

Okra: Spicy Okra Fries to enjoy on my trip to the airport.

Hopefully this gave you some ideas! I look forward to sharing the bounty and how it is used each week. However, I would love your ideas. How would you have used the goodies in this week's CSA box?
Posted by C.G. the Foodie at 9:27 AM

Very inspiring! I would have never known what to do with Okra or Kale! No all I need is a dehydrator!

i wonder if there is one in Queens... there should be.