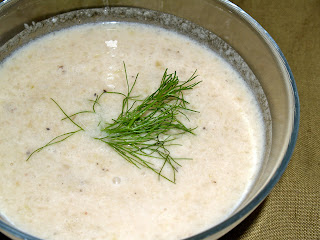 Ever since I received my Hamilton Beach 2-speed Hand Blender from CSN Stores, I have been dying to make soup. But with the weather in California heating up, I knew whatever I decided on would have to be on the lighter side. So when my latest produce delivery included green garlic and fennel bulbs, I KNEW what I wanted to try.

Green garlic season is now, so if you want to try this recipe, take advantage of the season before it is gone! Green garlic is harvested before the garlic cloves have begun to develop. The resulting plant looks almost like a scallion. It is milder in garlic flavor and when it is cooked, it sweetens and gets a unique complex flavor which needs minimal seasoning. Which is why it was perfect for this soup!

I have previously written about fennel when creating a simple salad last year. I used two fennel bulbs that are smaller in size but you can probably get away with one larger bulb. I only used the white of the bulb, and a bit of the fern for garnish.

The soup stays light, but creamy, through the use of unsweetened vanilla almond milk (I use Blue Diamond Almond Breeze) and the blending of the vegetables to create the thicker soup. I used my new Hamilton 2-speed hand blender which allowed me to blend the soup in the stockpot. It was quick and easy to use and clean which was a nice change from having to pour soups into my blender in batches. Letting the soup sit allows a natural thickening to occur and it reheated well for later meals.

Heat oil in a stock pot and add garlic and fennel. Toss garlic and fennel in oil for about a minute before reducing the heat. Sprinkle salt and pepper and cover, letting the garlic and fennel sweat in the covered pot. When the garlic and fennel have begun to caramelize, add almond milk and water. Stir and cover. Let simmer for twenty minutes or so, stirring occasionally. Remove from heat and using an immersion or hand blender, blend the ingredients together. The soup should be slightly chunky unless you want a smoother soup. Let sit for five minutes before serving, or store and reheat later.

Great looking soup, I have never bought fennel. Today would be a great day for it - it's cold and rainy.

is green garlic different from garlic scapes? those come in season around here in june/july (but it's much colder here!)

deep freeze - box up and mail it to me!

Is green garlic the same as garlic scapes?? Those were in my CSA box last year, and I had no idea what to do with them!

Good question! I don't think I have ever used Garlic Scapes, so I needed to look it up.

According to All About Green Garlic and Garlic Scapes: "Garlic scapes are the curled flower stalks of hardnecked garlic varieties grown in colder climates. They are cut off by growers to encourage better bulb growth and available through early summer in colder growing regions. Crunchy, with a mild garlic flavor, garlic scapes are great in salads and stir-frys." (http://localfoods.about.com/od/greengarlicgarlicscape/a/aboutgrgarlics.htm)

This would mean they were available later in the season and are the tops of the garlic stem. The Green Garlic is the immature bulb of the garlic before the bulb forms into the cloves we are familiar with.

Oh this looks so good! Thanks for linking up with Just Another Meatless Monday!

Biz319 - I made pesto with my garlic scapes, it is potent though (but I love garlic). http://blog.washingtonpost.com/mighty-appetite/2006/06/my_friend_the_garlic_scape_1.html. I mixed the pesto in with pasta & veggies

im freezing at my desk right now... a hot bowl of this soup sounds perfect. I love fennel and i love the presentation on it.

Our green markets have begun to sell what they call "garlic whistles" which I believe are what you call green garlic. That means I can make and enjoy your lovely soup. I hope you are having a wonderful day. Blessings...Mary

I've never cooked with green garlic before! What a great way to showcase the flavors!

I can smell the lovely fragrance of this soup from here. I have been buying up spring garlic whenever I spot it at my farmers market. I just love the pungent aroma.

You can't beat a good soup. Looks delicious! I'll have to try it : )

For a cold day like today this creamy and garlicky soup is ideal!

Have a great week,

Wow, this soup must be so tasty...love the idea of using green garlic combined with fennel and the almond milk...yummie!

Mmm, fennel. It's so good just to eat it roasted with a little salt. Love how you've paired it with garlic too.

Mmm...looks delicious. A friend introduced me to fennel soup and I fell in love with it immediately.

This is such a great recipe! I was happy to stumble upon it, I'm never quite sure what to do with garlic greens. Also, I'm dairy free so this soup is perfect for me!

Oh wow, what a GREAT soup! I can eat this any day, rain or shine, cold or hot! I love that you used unsweetened almond milk, too. I use that often when cooking.

Hi
Hope its OK to contact you here but I couldn't find a contact form. First of all let me say your blog is beautifully designed and your photography is very professional. We'd like to invite you to appear on our foodie website: http://www.foodierama.com . have a look and if you are interested contact me through the email on this comment of through the contact form on our site
Cheers
Dave

We want to give you a chance to get free content for your website. We will write the articles for you, all you have to do is put them on your site, it's completely free to you.

If you ever run out of ideas on what to write about, just come to myfitnesscontent.com and grab an article.

Each article is completely unique to your site and has never been used or published before. This is a great way to build your website with content, gain more visitors and hopefully in the end, earn some type of revenue off the site.

With each article you post on your site, we will also build links to that article. This will allow your articles to rank well in google, bringing more traffic to your site.

Why do we do this? By us helping you, in the end it will also help us. It's a win-win situation. Just take a look at our site at http://www.myfitnesscontent.com

Thank you for your time!