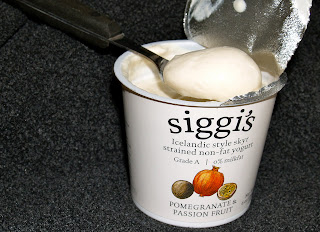 While wandering the aisles of Whole Foods, looking for a new food to inspire my taste buds, I stumbled upon Siggi's Icelandic Style Skyr. It was in a light container with a removable sleeve so that it coule be recycled. The flavor dancing in front of my was Pomegranate & Passion Fruit ("what yummy sounding combination" I thought). Oh, and it was on sale. So I had to buy it!

Upon my return home, I had to figure out what the skyr was. I figured out it was yogurt from the label... but I had never heard of Icelandic yogurt. The following is taken directly from the Siggi's Web site:

"Skyr is the traditional yogurt of Iceland. It is made by incubating skim milk with live active cultures. The whey, the water naturally found in milk, is then strained away to make for a much thicker, creamier, concentrated yogurt. So to make just one cup of skyr, with all that water going out, you need 3 - 4 times the amount of milk required to make a regular cup of yogurt. As a result of this process skyr comes out with 2-3 times the protein count of standard yogurt.

According to the Sagas, the original stories of the Norse Vikings, Icelanders have made skyr since settlers from Norway first arrived on the island in the 9th century. The word skyr is probably derived from the Icelandic word skera, which means to cut or slice–– a reference to the ideal thickness perhaps? The modern word for regular yogurt, jógúrt, didn’t exist in Icelandic until the 20th Century. Before then, regular yogurt was sometimes referred to as Búlgarst skyr, or ‘Bulgarian skyr,’ because of its popularity in Bulgaria.

Skyr was always, and is still, made from skim milk after the cream had been floated off to make butter. The skim was incubated with cultures and the resulting yogurt strained to take out the whey. Traditionally, the whey that subsequently came off the skyr was then used to pickle various foods in the summer to help last out Iceland’s long, arduous winters. Thus, skyr was part of a process that historically was centered on maximizing the yield and storage time of milk.

Skyr is a big part of the modern diet in Iceland. It has enjoyed a resurgence of kind in the past decades, in particular among athletes and the nation’s prominent musclemen as a highly coveted and convenient source of protein for them muscles!

Okay, enough of the background info. Now to what you are all wondering. Is it worth my money?

In a word... Yes! I am a big fan of Greek yogurt, which is thick and high in protein. But Greek yogurt isn't very sweet which turns off some people. Siggi's skyr yogurt is sweetened slightly with agave nectar and actual fruit so it doesn't have the bite than many yogurts have. However, it is thick and creamy. Perfect for breakfast or dessert!

I haven't had an opportunity to try the other flavors (they were all sold out!) but the other Siggi's flavors include: Acai, Vanilla, Grapefruit, Blueberry, Orange & Ginger, and Plain. With 100-120 calories a serving, no fat what-so-ever, and 16-17 grams of protein, these babies will all be coming home with me!

Interesting. I love plain greek yogurt, and I don't really like plain 'regular' yogurt. Something about the fluffy consistency and less tang? I love the protein boost in these yogurts!

I love Siggi's yogurt! That flavor is one of my faves, too. The only downside is the steep price, but it's definitely worth it for me on occasion. Sooo good :)

awesome review!! i see this yogurt at Whole Foods all the time too and am super curious about it. I'll have to try some out now. Thanks!! Oh and I think San Jose to Santa Monica is definently day trip doable! ;)

Mmmmm, this sounds fantastic! I hope I can find it when I travel to my 'upscale' grocery store!

Ps. I made the pumpkin oatmeal this morning and it was sooooo delicious! It will become a regular for me, thanks!

A traditional yogurt of Iceland, never heard about it. I'd like to taste it :)

That sounds really delicious! I like the variety of flavors - so different!

Icelandic yogurt?? Who knew?? ;)
Wow, I'll definitely have to scour my Whole Foods to try that. I admit, though, that I do like the tartness of Greek yogurt. But sounds like the Icelandic one is just barely sweet, which is nice. Not like those sugar-bomb American versions.

oh cool pudding and will look for that yogurt

Fresh direct just started sellign this and i am kicking myself for not getting it on sale! gotta get it next time!

I just discovered Siggi's and I am hooked. It is so delicious and filling. I justify the price because one carton is perfect for breakfast and keeps me full until lunch. The orange and ginger flavor is delicious and grapefruit is my second favorite.

Sounds wonderful! I love Greek yogurt as well and this sounds like a great and healthy snack for days that I go to the gym to help with my protein intake. Thanks for posting this!

I also found this wonderful treat at Whole Foods and am now completely hooked on it. I most enjoy the Orange & Ginger. This is by far the best yogurt I have ever eaten.