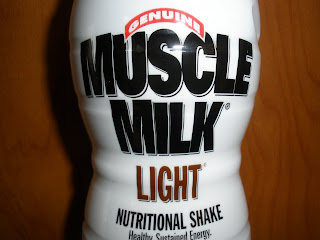 As a frequent traveler with crazy hours, I often find myself eating terrible food with poor nutritional content when the travel and work seem overwhelming. Take tonight for example. I am in New York, it is 1am and I am not yet asleep. I have to be up by 5am to make the tournament on time in the morning which means I will probably be skipping another morning workout and grabbing some terribly unhealthy fare that may or may not keep me full.

While at the Oakland airport on Thursday, a bottle caught my eye. It was a beverage that I had tried a sample of at the San Jose Rock and Roll Half Marathon that I remembered enjoying. I looked at the nutritional label and it sounded like it would be quick the breakfast. Recognizing I would be getting to my hotel incredibly late and would be rushing off in the morning, I bought this bottle and tossed it in my carry-on. After a chill in my hotel mini-fridge, I grabbed the bottle and gulped it down.

Muscle Milk Light is a surprisingly tasty beverage. As someone who doesn't drink much milk, it reminds me of a chocolate milk, slightly thicker than a skim milk, and not as chalky as other protein beverages I have tried. It kept me full all morning until about five hours later when I realized I needed to get lunch. And it is shelf-stable (until opened) which makes the 14 fluid ounce bottle a perfect travel breakfast.

The beverage has 160 calories, 4.5 grams of fat, 5 grams of fiber and 20 grams of protein! It also has a number of vitamins and minerals including 25 percent of your daily calcium and Vitamin D. While it does use acesulfame potassium and sucralose, it does not contain aspartame. I was a bit frustrated to learn of the other two artificial sweeteners being used and will be writing to ask if they are looking into more natural sweeteners. However, I will still on occassion be picking up a bottle of Muscle Milk Light because it kept me going while herding high school kids across the boroughs!

I'll have to search for this and try it. Thanks!

Great recommendation, we always look for delicious drinks when on travel!

A friend of mine was just telling me about this stuff. She said she seemed to have more energy and feel fuller after having one for breakfast. I'm with you, though. I'm not a big fan of artificial sweeteners, mostly because they all have that nasty aftertaste.

I'll have to search for this and try it. Thanks!