On the Grill: Fava Beans 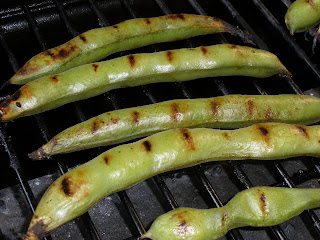 "A census taker once tried to test me. I ate his liver with some fava beans and a nice chianti."

I am sure when Hannibal Lecter was quoted saying this, he had taken the time to prepare Fava Beans in a more traditional method than just tossing them on the grill. Fava Beans, an Old World favorite, have become a more common farmer's market find in recent years during a fleeting season. These beans are often difficult to prepare, since you first have to shuck the pods, and then remove the waxy layer coating each individual bean.

However, I am the cook who likes simplicity and shortcuts, which meant finding a way to make the process quicker. I found that grilling the pods for four minutes on each side charred up the pod nicely and steamed off the waxy bean shell. Quickly shucked and shelled, I enjoyed my fava beans tossed with a drizzle of Gotta Luv It dressing. You could also make my beloved Asparagus and Fava Bean Salad!

Enjoy Fava Beans during their brief season because according to NPR:

"(Fava Beans) are nutrition superheroes. They are high in fiber and iron, and low in sodium and fat. They have no cholesterol but so much protein, they are called the meat of the poor.

As a matter of fact, Italians credit the fava bean as a factor in saving Sicilians from starvation during a time of famine. Since then, the fava has been considered good luck. Now that luck – and magic – is being enjoyed at more American tables."

I've never tried Fava beans, but, now I think I might have to :)

Ohh, you got the foodista widget working on your post. I need to learn how to make my work still :)

Nutrition superheros, huh...as well as good luck? I could use both of those about now :D

I remember reading how chefs like Judy Rogers at Zuni Cafe in San Francisco grill the whole young favas like this, too. I still have yet to try it at home on the Weber. But thanks for the reminder that I should soon while they're still in season.