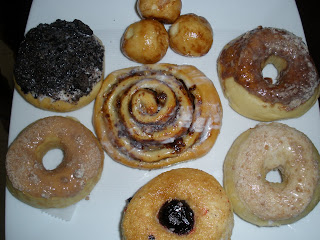 For the past four years I have had the honor of being friends with a fabulous group of women from throughout the country. We met through the Weight Watchers boards when we all joined a group challenge, and we have been emailing each other almost daily since. Our group was dubbed the Veggie Vixens, and the name has stuck with us through all of these years.

While our group members live in every time zone, I am lucky to have a number of them in my region. Which meant when I got an opportunity to review Holey Donuts, I had to invite some of my favorite girls together to taste and dish about these reduced calorie sweets. 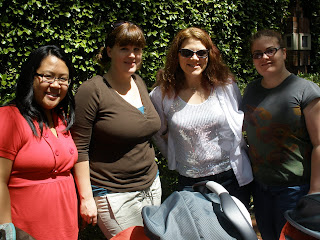 Jasmine, mother of an infant and a toddler; Erika, mother of infant twins; Zara, mother of four school age boys; and me, high school debate coach and companion to two cats :-)

We made up a variety plate that included all but one donut which I had forgotten at home. I will review that one at the end since it was my favorite! But first, here is beautiful Zara modeling out sample tray. Zara is not only a mom but also a runner and business owner. Seriously she amazes me! 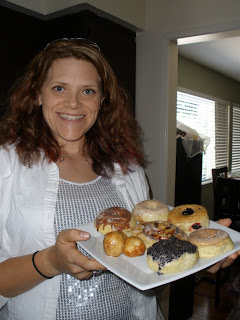 Holey Donuts, a small family owned company, makes each of these donuts by hand. You can learn more about their story here. Right now the donuts can only be ordered online, however there are rumors that Holey Donut stores may be opening in the future. Upon receiving the donuts, they are stored in the freezer and heated up individually as the consumer wishes to enjoy them.

We began with the Low Fat Crumb donuts. These were a bit too dense for most of us but Zara said "The glaze was just the right amount of sweet to balance the breadiness of the donut. The chocolate and caramel flavors didn't really come through enough for me, though. Perhaps cocoa in the chocolate donut dough would help? The reduced fat chocolate, vanilla, and caramel-glazed donuts were a decent substitute for sugary sprinkle-topped donuts I would get at my local donut shop. They were also denser and more chewy than traditional donuts. I would compare them more to a "cake donut" versus a glazed donut."

Unfortunately, baking the donuts leaves them less fluffy which is fine if you don't expect your donuts to have the texture of, well, donuts! Jasmine put it best when she said "I thought they were a little too dense and bread-y in texture for donuts. The texture was perfect for the cinnamon roll, but I like my donuts fluffier and lighter. Taste wise they were pretty good. They certainly didn't taste like low fat/low cal donuts. I thought some were too sweet, but normally I eat my donuts with a big glass of milk to cut the sweetness which I didn't have for this tasting." While Erika felt they were all plain and tasted generally the same, Jasmine and Zara both voted vanilla as their favorite of the bunch. I am a caramel fanatic and enjoyed the sweet glaze of this one. These donuts have 148/9 calories, 3 grams of fat, 1 gram of fiber and 4 grams of protein in every donut. 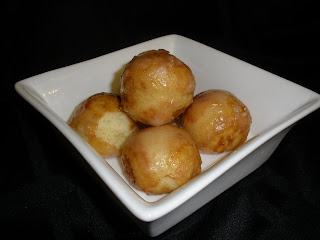 Next we moved into the cinnamon donut holes. These were one of Erika's top picks. In my opinion, the small bits of baked dough were sweet and lighter than the other donuts. You get four in one serving which makes the enjoyment last longer. Zara felt they were "a bit doughy, not as light and fluffy as regular donut holes. That's ok with me, though.. They were just the right amount of sweet, too. Being a carb/sweet addict, these really appealed to me and I could see myself easily overdoing it on them." However, Jasmine felt that the topping was almost too sweet and the texture was too heavy. Four donut holes are 148 calories, 3 grams of fat, 1 gram of fiber and 3.5 grams of protein. 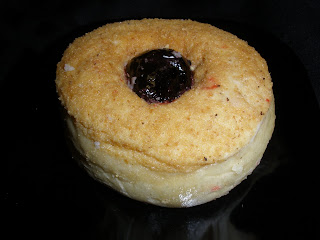 The Raspberry Graham Cracker resembles a jelly filled donut. This was one of my two favorites because the texture of the actual donut was less dense then some of the others. I agree with Zara who said she would enjoy this as a dessert rather than a breakfast item. However I tend to enjoy sweets as dessert because a high sugar start to the morning can set me up for healthy eating failure, no matter how many calories the breakfast is. Both Jasmine and Zara said that jelly donuts usually gross them out, but the filling on this one was less sweet. Zara also said that "the filling seemed fresher than traditional jelly donut filling, which has always seemed fake and over-processed. This filling seemed to actually contain a good amount of real berries." This donut is larger than the Low Fat Crumb donuts, and contains 217 calories, 3.9 grams of fat, 1 grams of fiber and 5 grams of protein. 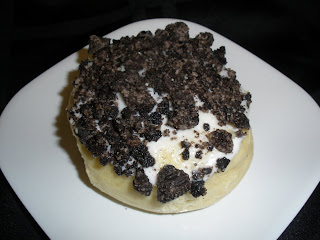 The Banana Cream Oreo Cookie is another filled donut that is filled with a banana cream and topped with frosting and oreo cookie crumbs. This was Zara's favorite because "the banana and chocolate flavors were in just the right balance and made a good contrast to the dough-y donut. This donut was a bit messy, too, so I'd probably use a fork and knife to eat this one, as well. This would also go well with coffee." Jasmine also enjoyed this donut saying is "was pretty good. The banana filling wasn't too sweet and made a nice contrast to the cookie crumbs on top. Since it was mostly the creme/custard filling, I didn't notice the texture of the actual donut." These creamy chocolaty delights are 222 calories, 4 grams of fat, 1 gram of fiber and 5 grams of protein each. 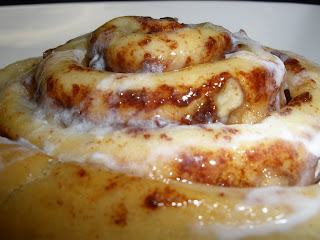 The cinnamon roll was a favorite of Jasmine, Erika and Zara. It is large and would make a great dessert! Zara isn't sure she would spend that many points on the cinnamon roll for breakfast but said "The cinnamon roll was delicious. It was a reasonable substitute for a Cinnabon. Just the right amount of stickiness and icing! I would definitely warm this up and eat it with a fork and a knife." Jasmine, a fellow cinnamon roll lover felt that the roll "was really good. Perfect texture and flavor. Couldn't tell the difference between this and a regular cinnamon bun" These are 340 calories, 5 grams of fat, 2 grams of fiber and 8 grams of protein each but are rather large and could easily be shared! 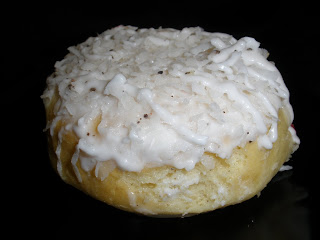 I felt bad leaving this last one at home, but the Coconut Creme Pie was my favorite of the Holey Donut line. It has a sweet creme in the middle that balances out the chewy donut of the actual donut. The topping is sweet and the coconut on top is generous and adds another dimension to the overall texture of the treat. The Coconut Creme Pie donuts are 209 calories, 4 grams of fat, 1 gram of fiber, and 5 grams of protein each.

Overall, Holey Donuts have given calorie conscious individuals an opportunity for a lower calorie version of a favorite sweet treat. The texture is not the same as a higher calorie fried donut but most of the donuts are still tasty and delicious. As you can see, through the eyes of many tasters, that the worthiness of the donut differs from taste bud to taste bud. However, if you are a sweets lover and looking for something to fill that craving, I would recommend ordering a couple of mixed boxes to find your favorites.
Posted by C.G. the Foodie at 10:36 AM

Wow, my blood sugar is elevated after looking at these great pics. These are healthier than regular donuts, amazing. Thanks for the review.
I did a foodie post today on sweets also. Must be something in the air.

My daughter and I loved the holey doughnuts especially the cinnamon rolls!

Oh my goodness!!! These look amazing; almost too good to be true!!

So inquiring minds want to know (OK, yes that would be me): Would you rather have three of these lower-cal, lower-fat donuts OR one full-fat, full-cal donut from your fave donut shop?

If I could have one coconut creme, one raspberry graham, and one cinnamon roll... I would want three of these because I get variety. That said, I only eat donuts when I have a mad crazy craving (or they are fresh beignets... I hear it is just illegal to turn those down) so I don't really have a favorite (except those hot fresh beignets...)

Hmmm... I've been thinking of donuts on my way home.