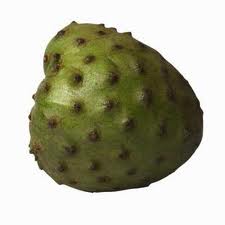 I have fond memories of my father grocery shopping when I was a child, where he would come home and announce in a proud voice that he had something for my mother. She would ask what it was, to which he would produce this green, pine cone looking, leathery appearing thing. She would get excited and hug him. She would savor the fruit, enjoying every bite, and the house would be full of smiles.

This was my first exposure to the exotic fruit we know as the Cherimoya. A delicate and difficult to grow fruit, the Cherimoya is slowing gaining popularity in the world of food for it's sweet custard pulp and was described by Mark Twain as "deliciousness itself!" Grown primarily in Spain and the coastal areas of South America, the Cherimoya can also be found growing in some of the most expensive real estate along the southern California coast line.

"Cherimoyas like to grow on expensive land," Jay Ruskey, owner of Calimoya Exotic Fruits, explained to me when I recently had an opportunity to talk to him about one of my mother's favorite foods. "It likes to grow in the same climate that people like to live in: No freeze, no wind, near the ocean and on hillsides."

A relative of the Soursop and the Guanabana, there are a number of varieties of the Cherimoya. Mr. Ruskey compared the fruit to an apple. We recognize the apple, but only in more recent years have people begun to express interest in specific varietals.

Cherimoyas are a relatively unknown fruit in the United States, outside of it's growing region in California. The delicacy of the fruit makes it difficult to ship, and the growers are a smaller collective who lack the marketing power of larger agricultural commodities. However, you may find a small batch of Cherimoyas in specialty food stores like a Whole Foods near you. With a growing season from December to May, the season is almost over for the year. Calimoya also offers an online store where customers can order the organic fruits directly from the growers. The Cherimoyas are packed and shipped the same day they are picked.

One of the common internet myths that I wanted to take an opportunity to dispel was the idea that a Cherimoya can kill you if you eat the skin and seeds. According to Mr. Ruskey, the skin is tannic but not poisonous. The seeds of the Cherimoya do contain alkaloids, similar to a number of other plant seeds, and while you could do a fair amount of processing to collect the alkaloids, accidentally swallowing one seed won't harm you. Lucky for my readers, I recently swallowed a Cherimoya seed and I am still here typing this post (or am I....?) so rest assured that Mr. Ruskey is indeed correct in his analysis.

I personally find my Cherimoya fix at the local farmers market. For a terrifically low cost, I can pick up a couple of these fresh fruits and take them home and savor them like I watched my mother do, just a few short years ago. A Cherimoya is ripe when it gives in to slight pressure, and you should not put it in the fridge before it is ripe because the cold air halts the ripening process. However, if your fruit ripens before you are ready to enjoy it, it can keep a couple of days in the fridge.

I prefer to cut my Cherimoya in half and enjoy it with a spoon. The flesh is a velvety pulp but almost custard-like in texture. It has notes of melon, pineapple, pear, banana, strawberry and a smooth creamy sensation as it passes over your tongue. While it is fabulous on its own, and has often replaced my end of meal high calorie dessert, the Cherimoya is also good mixed in with ice creams, into smoothies, in fruit salads, and even in wine! Mr. Ruskey provides several recipes that highlight the Cherimoya on the Calimoya site.

Although not as low in calories as some other fruits, the depth of flavor and high potassium levels make up for the extra calories. A one cup serving contains 115 calories, 1 gram of fat, 3.6 grams of fiber and 2.6 grams of protein. It also contains 30% of the RDA of Vitamin C and 420mgs of potassium, 12% of your daily RDA!

According to the University of Maryland Medical Center, "Potassium is a mineral that helps the kidneys function normally. It is also an electrolyte, a substance that conducts electricity in the body, along with sodium, chloride, calcium, and magnesium. Potassium is crucial to heart function and plays a key role in skeletal and smooth muscle contraction, making it important for normal digestive and muscular function, too." Adults should aim for 2000 mg of potassium in their daily diets.

From the health benefits to the amazing flavor, Cherimoyas aren't just a happy memory for me. They are a delectable dietary delicacy that will continue to grace my kitchen.

your blog is interesting and informative. makes me want to eat healthier. :)

mmmm, now I want one!

Interesting! My sister's friend owned an acre sized lot in Santa Barbara, and he grew cherimoyas there. One time, my Mom and my sister went there and picked all they could eat. I hope more people learn about this wonderful fruit!

Ahhh, custard apples! I love cherimoyas. Have only had them once -- when I visited Spain years ago. I remember seeing them being sold in a Harry & David catalogue. I think it was like $20 for two of them! I guess it's still cheaper than a plane ticket to Spain, but STILL....

The last two weeks there has been a farmer at the West Valley College farmers market who has had a couple dozen. He was selling them for $3 a pound!

WOW, that is one interesting fruit! I don't think I have ever seen a Cherimoya but we have a marketplace called Jungle Jims and I bet he sells them!! I definitely want to try one! Very good blog :-)

I am not at all familiar with this fruit. Thanks for the info, I will look for it!

YAY! Carol is on the Foodie Blogroll!!! WOOT!

Great Blog! I have a foodie blog to but my main blog took over and it has been put to bed temporarily! I too try and eat right and food is definately interesting!

Dropping by from SITS to say welcome!

Yum! I love custard apples too! What a really great post!Hope you wont mind but I'd love to direct Foodista readers to your site, just add this little widget here and it's all set to go, Thanks!

Is eating 3 or 4 cherimoya a day while it's still in season is bad for your health? How about the sugar content of this fruit? I love cherimoya and soursop.