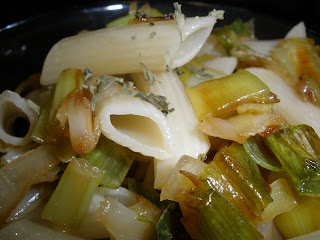 From chicken penne bakes to fettuccini alfredo, pasta is a carb lovers dream come true! However for the calorie and health conscious individual, your average box of pasta lacks the nutritional value of so many other edible options. Which is why I jumped at the opportunity to try out a low-calorie, high-fiber pasta!

But how does it taste? I recently got a couple of organic, locally grown leeks in my produce delivery. I decided I would make some Caramelized Leek Pasta and try this new penne out!

Slice leek bulbs into strands, include the green part of the bulb.

In a pan, warm one tablespoon of olive oil at medium-high heat. Add leeks and stir to coat. Continue to cook for 8-10 minutes, stirring often. Reduce heat to medium. Sprinkle brown sugar over the leeks and toss. Continue cooking for another 10 to 15 minutes.

While leeks are cooking, cook Fiber Gourmet pasta according to box directions. Drain but do not rinse. Toss with leeks and one teaspoon of olive oil. Serve with a sprinkle of parsley and season to taste. 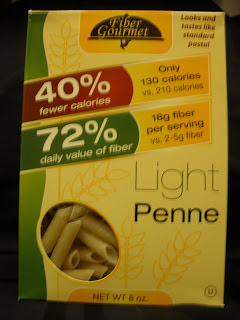 The pasta tasted like normal pasta! It was a little tough, but I think cooking it towards the longer end of the time would prevent that. Mixed with the sweetness of the caramelized leeks and a sprinkle of sea salt and I can't tell it is light! I was a bit suprised how similar it tasted to regular pasta but at fourty percent fewer calories.

Fiber Gourmet can be ordered online or found at these stores. If you are ordering online, I would recommend order a substancial amount because of the flat shipping fee. Pasta can keep for up to two years on the shelf which allows you to save on shipping and stock up on this low calorie pasta.

just found your blog, think I will follow along for awhile, looks good

I love caramelized leeks and they sound awesome with pasta!

this sounds amazing- I'm a huge fan of leeks!

I've heard of this pasta at Saving Dinners. It sounds really incredible to me, to have that much fiber and yet taste pretty good! the caramelized leeks sound reaaaaally good. great spin on the caramelized onions!

I'm always dubious of "light'' pasta products. But this one actually sounds like it might be decent and worth a try.