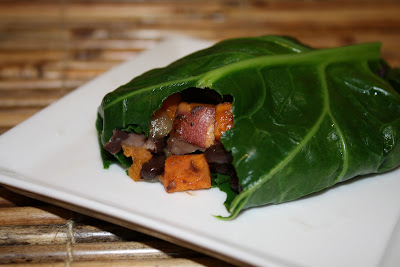 It's just a big green leaf but it was new to me this year. The Collard Green in it's raw and fresh form is something I had never purchased nor made but it's been popping up in my CSA pick-up almost every week this season and after preparing it in all of the ways I had prepared canned or frozen greens, I decided it was time to try something new (to me). I have had tacos with lettuce shells so why not a wrap with a collard green "tortilla"?

For those of you not familiar with the giant green leaf, it is actually a nutritional powerhouse. According to the Whole Foods Web site, these greens can help lower cholesterol and may protect against cancer. They are low in calories but high in vitamins K & A (among other great things!). So using them in place of a high-processed, carb-loaded wrap means you can up your nutrients while reducing your waistline.

To prepare the "wraps" you will want to first remove the fibrous stem from the collard leaf. Cut far enough into the lean to remove the coarse part of the stem but not so far you destroy the tortilla appearance. You will then want to blanch it in boiling water for 3-5 minutes until the leaves become pliable. Immediately following the boiling bath, give them an ice water bath and set aside to fill with your fillings of choice.

I filled my collard wraps with a quick and easy hash. I heated up some avocado oil, added half of a diced white onion and a diced sweet potato. Cooked these with some garlic powder, chili powder, sea salt, and black pepper. Then added some canned black beans when the potatoes became tender. Easy, simple, and you can adjust the ingredients according to taste.
Posted by C.G. the Foodie at 3:58 PM