While walking through the grocery store the other day, a new fruit caught my eye. It looked like a grape, but it wasn't a grape. I checked out the label on the package and saw it was a gooseberry? I had to buy them as I had never had a fresh gooseberry. And try them I did!

Apparently gooseberries grow abundantly in the San Francisco Bay Area and yet I had never tried them before? According to the California Rare Fruit Growers, "Gooseberries grow best in summer humid, cool regions with great winter chilling. In California they are fairly productive in the coolest parts of the San Francisco Bay Area, the outer Coast Ranges and coastal northern California. They are probably not worth trying in southern California. except at high elevations. With proper attention gooseberries can be grown in containers. "

Seeing it is winter, my gooseberries came from our neighbor to the South. I normally buy local produce but I didn't realize these were even grown locally! I am planning on looking for some locally grown gooseberries during the proper season.

So am I saying I liked them? They were surprisingly tart which caught me off guard. However, I boiled some water, added some sugar and dissolved it. Then I added the gooseberries to make a delightful sauce that was fabulous mixed in with my yogurt and ice cream. It was delightful!

One cup of gooseberries has 66 calories and 6 grams of fiber. 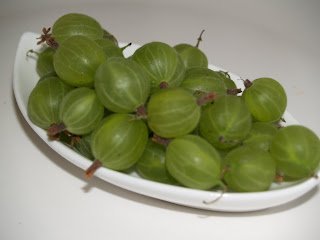 What a creative way to enjoy them.

Goosberries how interesting. They look alot like the green little tomatoes called "tomatillos" that I use in chile verde. Tomatillos are from the goosberry family so now I am curious. I will look for them. I'd sure like to compare the flavor to tomatillos as tomatillos have a lemony/tart flavor.

I had those all the time growing up in Ukraine but haven't seen them around here. I like your idea of eating them with ice cream or yogurt.

I don't have this type of fruit here and they look very interesting to taste!
Have a great week,

I’ve 2 awards for you, waiting at my blog!

I love gooseberries. Glad you love them!